****We are no longer certain this family is related to our family, but will keep this blog up to help other families*****
It's no surprise to genealogists when researching a name to find variations in spelling. Sometimes a name changed spelling at immigration (Ludwig Reiter became Louis Reiter), sometimes ancestors changed it themselves (William Farncombe became William Reed), sometimes the family was illiterate and didn't know how the census taker wrote the name (Sallez became Silas), sometimes the family anglicized the name (Mueller became Miller) and sometimes the family just interchanged the names for whatever reason.

We have recently found documents for the Grimes family in St. Louis 1826-1833 that sure answer a lot of questions we have about our Graham family. Here is what we know: John Graham ("Grayham" in Maryland) married Mary McGowey (McGowley, McGauley, McCauley,so many spellings on that last name including McCoy), moved to Kentucky and ultimately to St. Louis, Missouri where he had a Spanish Land Grant in 1797. John Graham witnessed the burial of Jean Baptiste Carrico. Vincent Carrico was the administrator for John, Jr.'s estate. Carricos and Grahams were neighbors, but we suspected they were related since they had both come out of Maryland. See this blog to see how close the Carricos lived to the Grahams.

The Carricos were, indeed, related to the Grimes family---there were several marriages among the families which was very common among frontier families. Being an administrator and witness of a non-family member would have been uncommon especially among the Spanish Land grant families. Before I do a blog on the Grimes-Carricos, let me cite a few people on the Grimes/Graham name. One person was concerned because they had 67 marker match with someone named Grimes but their family name was Graham. Here are the responses of two people:

Over the centuries...both language and speech
impediments are at the root of the spelling difference(s).
It is here...that phonetics very actively reared up.

If you've ever listened to a solidly serious Celtic
brogue....'GRAHAM' sounds like 'GRIME'.

Also...I don't remember if [your DNA match] has Irish or Scot data
...but keep in mind that the English held the Courts.

The Court Clerks were NOT native to Ireland or Scotland.
In fact...most weren't even English. They were usually
French or German...and they spelled as their language
then dictated...per the phonetic sound they heard.

At any rate...the Court Clerks spelled names any way
that they felt like and at any given point in time.

(I might add that in St. Louis in the early 1800's the clerks were usually French writing in English or Spanish, so the Clerk problem did exist in St. Louis, too.)

Someone else also responded to this "thread":

Grimes and Graham in Ireland have long been interchangeable, especially before about 1850. The Graham clan was originally Scottish. The Clan was one of the Riever (Raider) clans along the English-Scottish border in the 1400s and 1500s. When King James became king of the combined countries he set out to break the power of the Riever clans. The Grahams were defeated and rounded up and transplanted to Ireland around 1603 as part of the 'Plantation of Ireland'.In Ireland they eventually assumed the Grimes name. And when they snuck back into Scotland, they became Graham again. Some years ago the Australian Government compiled a list of Irish people who had been sentenced to the penal colonies in Australia and Tasmania.The compiled list was presented to the Irish Government by the Aussies. I forget the exact numbers but there were a few dozen Grahams,about half of whom had aliases of Grimes, and vice versa.Bill Grimes in Texas . 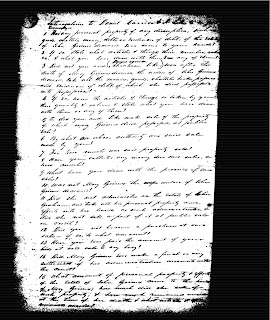 Posted by Jaclyn Morgan at 1:00 PM

Jaclyn Morgan
Mother of 3; grandmother of 8; wife of 1; sister of 2; cousin of dozens; aunt of 7; great-aunt of 7; teacher of thousands